“My advice to other disabled people would be, concentrate on things your disability doesn’t prevent you doing well, and don’t regret the things it interferes with. Don’t be disabled in spirit as well as physically.” -Stephen Hawking

The human spirit is one of ability, perseverance and courage that no disability can steal away. Paulami is a shining example of how a tragedy can be turned into a fuel that drives you to achieve your goals, no matter what. She was only 12 when she lost her right hand .But ,16 years later and with 45 surgeries performed on her, this 28-year-old  Mumbaikar is perhaps one of the most resilient and strong persons, you could ever meet.

Her story will shatter you to the pieces as well as inspire you in a way that however difficult life may seem, there is always something you can do and succeed at. The only disability in life is not to trust your abilities. So, this courageous girl Paulami believed in herself & was confident & determined to don’t lose in life , because of the tragic incident happened to her and with her strong will and support of her parents ,she has made her career successful and life blissful. She  may be different ,but not less. 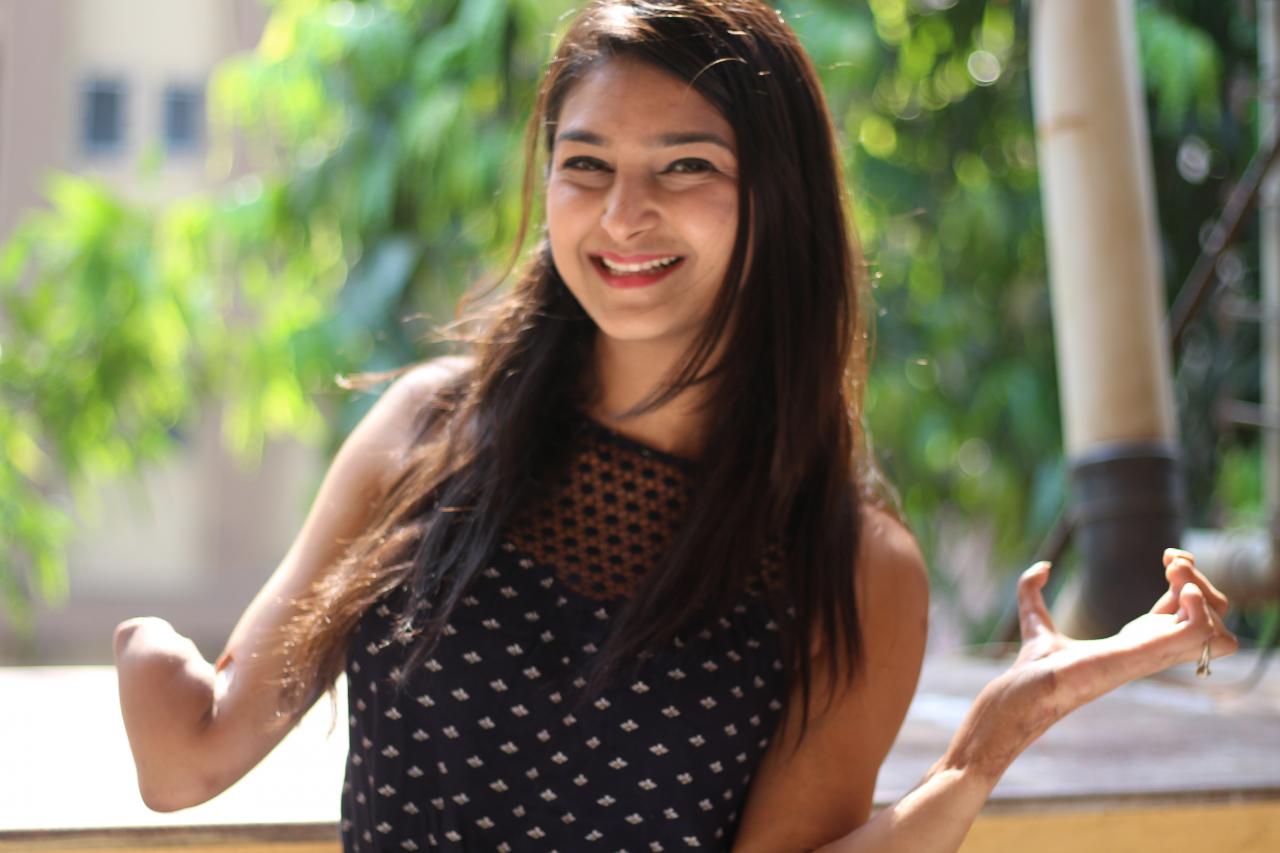 Like all others, Paulami Patel Jotwani was also a normal girl whose life was running smoothly till an unfateful incident happened in her life. She was only 12 and to spend her summer vacations, this six standard girl went to Hyderabad  at her paternal Uncle’s home for ‘cousin’s reunion. But one afternoon, when she was playing with her cousin , she got electrocuted while playing with a fishing rod. The rod slipped out of the window and while trying to catch it, she got caught onto an electrical wire instead and 11,000 volts of current ran through her right hand. The current intensified when her body touched a steel chair for the mere fraction of seconds. She yelled in pain and blacked out. The power went off, and her bruised body was thrown back.

She was found by her relatives severely bleeding with torn clothes and she was rushed to the ICU with 75-80% burns and parts of her flesh missing. Her mother could not believe the incident , when her parents were intimated about the same ,but her father, being an engineer quickly felt that something was wrong so, they immediately took first flight out of Mumbai to flew down to Hyderabad. No doubt, it was painful for the parents to see their daughter, fully bandaged and battling for her life. It was a miracle that she survived this incident. After a week, her right hand had to be amputated to prevent the Gangrene from spreading, though second & third opinion was taken from the doctors who esp. flown in ,from Mumbai.After staying for a month in Hyderabad hospital , she was taken to Breach Candy Hospital in Mumbai via Air Ambulance. In 8 months, she switched four hospital beds for treatment.

Once, her mother even ensured her that her hand would grow back as she was unable to accept that she didn’t have a right hand. Her parents were really her pillars of support and refused to accept any derogatory & insolent attitude from the visitors at the hospital who would often tell her parents that her life was doomed after seeing her scars, amputated hand and even pointed the way her body looked. Her dad even made a rule that whoever came to visit her,had to first tell a joke before starting any conversation – and it helped Paulami to recover. She would look forward to laughing and slowly began to get ready to face the world with her new reality. Even though she had lost a year in school, her principal and teachers were supportive. So she was given notes at home and was allowed to continue with her batch. She studied hard and gave her final exams with the assistance of a writer, and got a decent score. The same year she was fitted with a prosthetic arm. Her mother also connected her to several other people who had lost limbs or used prosthetics. When she interacted with them, she knew she was no longer alone, and she was motivated to it her best shot.”

Her first task was to practice to write with her prosthetic arm which seemed impossible at first, but as her  ayurvedic treatment continued, every day she could grasp the pen a little better and then one day it just happened !. Every day, she would diligently try and write five pages. At the same time, she was reading the children’s novel, Matilda. So she decided to copy the entire story on a book. By the time, she reached the end of the book, she had learnt to write one statement in one line.

That’s how the shift happened, instead of focusing on the struggle, she looked at it as a celebration of her second shot at life. From the day, she zipped her own bag, to the day she wore clothes on her own, the first time she locked a door or wrote all her examination papers by herself – everything was a celebration!

She completed her BCOM, got an MBA( in Family Business & Entrepreneurship from NMIMS) and lived by herself for two years – that’s when she knew that she was enough; that her disability was just a part of her life, not what defined it!At first, she tried to hide behind long sleeves, dupattas and never wore shorts because she has scars all over her legs, but over time ,she let it all go because, she became proud of her flaws and scars as they made her who she is today – fearless and positive

Currently, she runs her family business which deals with heavy machinery. She married her childhood sweetheart, Sundeep Jotwani after thirteen years of being known to each other through a mutual friend. , and their love story is apt for a novel. They met just after school and hit it off as best friends. According to her, he is the sweetest guy ,she know. Even in the initial days, he never asked her anything about her accident upfront. Whatever, he knew was through her friends.. From the beginning, he always understood what she needed and did it before her having to ask. She never felt embarrassed or awkward in Taking help from him . He has been her rock solid support through and through. They fell into a comfortable routine. When they entered a restaurant, and she couldn’t make smaller pieces of the food on her plate, he would listen to her order, call it to his plate, make pieces and then pass it to her. The best part about their relationship is that they communicated without words. She married the love of her life who only lifts her higher, work full time on her business, drive like a boss, skydive, bungee jump and do multiple open water drives and have so much more to do but not before she continue to celebrate every little victory and do her little dance along the way!” She is living her best adventurous life and encourages everyone to do the same.

This beautiful and incredible woman further added that she has seen both sides of life–as an able-bodied person and a person overcoming disability. All she want to say is that this is all a part of life. Don’t shut yourself down, don’t hold back. There is so much more to life and a whole world left to conquer. So what, if she don’t have a hand, she will still live her best life.”Paulami was truly born to fly and look she already is flying and how!

Doesn’t her story makes you want to celebrate the little joys of life and make the most of each day? And while her life is something each of us can learn a lot more from, what is even more heartwarming about her story is the relentless support her parents gave her through and through.

“The difference between those who fail and those who succeed is largely perseverance. So, never quit.”