True, once a cheater always a cheater.

But sometimes we meet that someone special who seems just perfect to us. No matter how bad his past was, how bad a person he was, now he is a totally changed person. There are usually cases when two best friends fall in love after a pretty long time.  They dont need to explain each other much, it’s always understood.  When they have known each other well enough, they know each other’s weaknesses and strengths. It usually happens when the two of them are only friends without any group.

The more understanding you have, the more compatible you are.

It was then when we both had our first breakup in college. We had a group of five friends which was no more a group after the breakup. We went through a lot of misconceptions and issues before we had actually broken up. Everything seemed shattered as all four of us were going through a phase in our lives where we had no one to trust. Things are really difficult to deal with when you are away from home. We do not have family support.

All this looked really difficult before we started talking a bit. The purpose was to make things okay for his girlfriend, as she was going through the most disturbed phase of her life. I never knew in the process any one of us would fall for the other. It was not long since he said: “you are clearing my shit” when one day he told me about his feelings, that he has fallen for me I was pretty sure, this is not going to last long, as the reason for his breakup was that he fell out of love. I ignored and we eventually stopped talking until he one day turned up telling me about his new girlfriend. We were back to being good friends. I felt he’s over those feelings he had for me.

There comes his another breakup, about which he was not so sad, as he was always casual about this relationship. He told me that his feelings had never changed for me. They were constant. I had lost trust in love and I told him it’s never possible for me to feel the same. He was okay with just being friends, and with time the bond became stronger. I don’t know it was because of his feelings or just the bond we always shared.

In spite of the denial, he never failed at any point of time when I needed help. He always showed up. All this in some way or the other made me think about him as a better person than what he used to be. We have always heard about just that one person who makes a difference. It’s just about those moments which we actually want to live and are suppressing ourselves due to something which is void.

I started looking forward to his every move. I started looking at the brighter side of life. I was emotionally attached to him, but there was a fear which always dwells, everything and every person are temporary. He always proved me wrong and I always had this question “till when ?”. We were really close to each other like I have never been to someone else even while dating. Life seemed pretty good. It always feels good when you have someone’s back when you know that no matter what you deal with, at the end that one person could make it easy for you. And trust me that one person actually makes a difference. 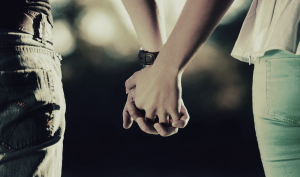 Life was smooth and happening before he met some new girl. They were having a really good time. Since we had no commitments to each other, I had no option to question him about this. Although he did tell me about her and whatever happened when they met. But, I was too immature to trust people at this level, and we just stopped talking abruptly for no known reasons. I believed that I was right with my intuition since he never tried to look back and explain. Well, but the fact is neither did I. Sometimes when we get broken we want someone to fix us but in the process of getting healed by some other person, we forget that we are shredding him/her too. Sometimes life is not that complicated as we make it or feel that it is, we can take the simpler way too, forget the hurt and try to trust and open up. As we never know we might loose a gem of a person in the process just like I did.

It’s all about Trust which keeps you going. Keep trust.