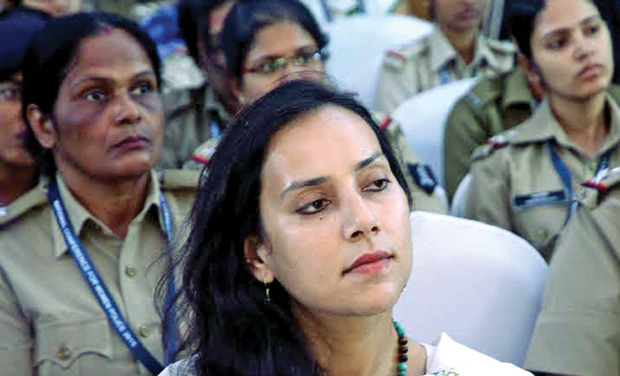 The enthusiasm and zeal of many brave female police officers has come to light as the entire nation combats against corruption and terrorism these days. Sanjukta Parashar , also known as the Iron Lady of Assam, an IPS officer  is one such woman who is making headlines for her laudable work and bravery .

In the last 15 months Sanjukta has arrested over 64 militants and set an example for others.She is also amongst the first woman to have been appointed as an IPS officer in Assam.

After completing her early education in Assam, Sanjukta later went to Indraprastha University for graduation in Political Science. After which she did her PhD from Jawaharlal Nehru University. Sanjukta had zealous  interest in sports since she was a child and also won many awards.

Sanjukta was intensely disturbed about the rising corruption and terror in Assam even at the time she was in school; thus, despite getting a good rank this young woman decided to work towards these issues by staying in her state. In 2008 she was first sent to Makum, Assam as an Assistant Commandant. Soon after which she was transferred to Udalguri in Assam to manage and control the communal violence between Bodo and illegal Bangladeshi militants. She killed nearly 16 militants and arrested 64 of them within 15 months of services towards her operation.

Sanjukta recently began an operation in which she jumped into the field herself with the AK47 rifle. This fearless young woman who is also a mother of a four year old has dedicated herself completely to the Anti-Bodo Militant Operations  in the past few years.

Sanjukta goes to relief camps many a times  to spend time with grieved people who have lost their family or houses  in militant attacks. She is able to spend time with her family only once in two months. The dedication and courage presented by Sanjukta to shun terrorism and corruption is honorary and respectworthy.